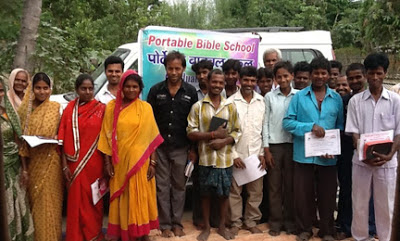 Few people who witnessed the Portable Bible School graduation on May 5th in the Koshi Region village of Khurda would have guessed a surprising fact. One of the students standing on two healthy legs was literally a walking miracle! She is pictured at left in the red sari.

M____ K_____, a 27-year-old woman, had been born into a traditional carpenter’s family. She grew up worshipping Hindu idols and practicing the rituals of her religion. She was schooled  through ninth grade, and then her life took a dramatically different direction. Believing that education for girls was meaningless, her family began instead to seek to give her in marriage.
When she was still only fifteen years old, she developed a mark on her leg. At first she didn’t take it seriously; she applied medication and waited for it to heal. Several years passed, and the strange malady began to worsen. In the meantime, her family succeeded in finding a husband and M_____ was married at seventeen. By then, everyone became more concerned about the wound on her leg, and a myriad of doctors were consulted, with no one able to diagnose the mysterious ailment.
Finally, the family consulted a witchdoctor, as is the custom in rural areas when an inexplicable ailment cannot be cured by modern medicine. When no healing was manifested there either, her husband decided it was likely incurable, either leprosy or cancer. In the local culture she was then devalued, useless for all practical purposes. He left her after only two years of marriage and sought a divorce.
Only nineteen years old, M____ returned to her parents’ house a broken woman, without any hope. Continuing consultations with doctors were fruitless, and in the meantime the disease began to spread, affecting her whole leg. M_____ became bedridden, and her family members left her alone, as is the Hindu tradition, to die.
Expecting death and waiting for it, M____ had no hope. But then… a Christian woman evangelist came to visit. She shared the gospel of Jesus Christ and prayed for her, assuring M____ that Jesus had the power to heal her. Later, a pastor came and prayed for her as well.  In spite of her desperation and pain, M____ was strengthened by the Holy Spirit to place her trust in Jesus for both salvation and healing.
Soon she began to literally feel the healing touch of the Lord, and signs of improvement began to be seen. Within only a few months the wound was completely healed! M_____ began to walk again, slowly at first, but then with more confidence and strength. She realized that she had been rescued from the very jaws of death!
M_____ started attending church, and soon her parents and family members, who had witnessed the healing miracle, also accepted Christ. All received baptism. M____ joined the evangelist as she traveled, and M_____’s testimony was a powerful witness for Christ; many people came to salvation.
For the past year M_____ has been visiting villages and conducting women’s fellowships; more than fifty women attend weekly in five villages! On Portable Bible School graduation day, M____’s shining face told the whole story of God’s redeeming miracle!  Her future plans include continuing to lead the women’s ministries, growing them into established churches in the communities where they meet. She will continue to be discipled and encouraged by the Bihar Christian Church, the ER-affiliated ministry which had sponsored the Portable Bible School.
Will you pray for M____ and thousands of women like her who need to find hope, healing, and purpose in the body of Christ? Pray also for the development of a new endeavor envisioned by Evangelism Resources to equip women, like M____, who show such promise as leaders. A proposal for the Women’s Impact Network (WIN) is currently under consideration for a grant for funding from a foundation. Pray with us that God will continue to empower women in India to witness, disciple, and win others into the Kingdom of God!

To give to support Portable Bible Schools, like the one that trained Meena to lead women's fellowships, click on the button below.

Posted by ERAdmin at 7:52 AM No comments:

The young woman bows her head in prayer, asking God to send her out to fulfill the Great Commission. Her state, Maharashtra, is populated by almost 115 million people and plays a lead role in the nation’s political, economic, and cultural destiny. There are 40,000 unreached villages in Maharashtra; 73 of its people groups remain without a witness.  Who will train this precious woman?
The number of Christians in the vast nation of India has exploded in recent years, due in part to efforts to disciple men for evangelism and church planting. In comparison, much less attention has been given to the discipleship of women. Indian society generally regards women as “second class citizens” with fewer rights, privileges, or consideration than men. They are disadvantaged emotionally, educationally, and economically.
Recent mass protests by women in India reveal a powerful undercurrent of discontent. While primarily angered by reports of violent rapes and related abuses, these women’s most important needs are truly spiritual, although most of them do not yet know it.
Sadly, this cultural attitude has also affected God’s Church. Women’s spiritual talents are often neglected in the planning of seminars, programs, training and mobilization. Apart from a handful of females receiving seminary training, very few opportunities are provided on the church level for equipping common women for better Christian life and ministry. Mobilizing women to win the lost and make disciples will dispel the cultural darkness, giving hope to women who face considerable challenges in everyday life.
Evangelism Resources and the Association of International Discipleship Advancement (ER/AIDA) have envisioned the “Women’s Impact Network” (WIN) to minister among Christian women of twenty states of India, mobilizing them to impact other women for discipleship advancement. Women challenged for deeper discipleship will undertake dynamic, spiritual formation with other women, who in turn will become empowered disciple-makers.
Some church leaders have already realized and expressed that women are better and more effective evangelists than many men. They have more opportunities than men to reach special populations, such as other women, children, teens and the elderly. Women are very influential when engaged in personal evangelism and hospital or jail ministries. Since many Indian women do not have careers, they are available to reach neighbors and families easily while the men are at work.
Another growing arena of influence for Christian women is among Muslim women. The Muslim population of India is growing rapidly, and the two faiths endure in common the increasing persecution from the dominant religion of Hinduism.
In bygone days, women teachers and evangelists were very common, accompanying missionary ladies in rural evangelism and ministries targeted to other women. Today, largely because of the efforts of those early pioneers, and by the grace of God, the number of new believers in India has increased tremendously. Women form more than fifty percent of the church’s population, yet little attention is being given to equip them for ministry.
All these factors compel us to see the urgency as well as usefulness of empowering women to be disciple-makers in our churches. Since we know that only a disciple can produce a disciple, we choose to impact through WIN selected women to be true disciples who will then impact other women with the same vision. Better disciples are better evangelists. Therefore, we are sure that if we prepare better disciples, they will be better witnesses too.
Will you pray with Evangelism Resources and AIDA for the funding to initiate the WIN project? A proposal has been submitted to a foundation for a matching grant; pray with us for favor for this request, and begin to ask the Lord how He wants YOU to help India’s women WIN for Christ!

Learn about ER's Women's Conferences at:
http://www.erinfo.org/viewNavMenu.do?menuID=118
Posted by ERAdmin at 8:07 AM No comments: