Testimony of a Muslim-Background Believer

S____ (name withheld for security purposes) fled for his life, his enraged father pursuing him with an axe. Having given his life to Christ, the 17-year-old was being disowned from his family. S_____’s father, a devout Nigerian Muslim, threw out all his belongings and physically chased him from the house with the intention of killing S_____ for becoming an infidel. This bitter experience is not uncommon for Muslim-background believers (MBBs).
S_____ had been indoctrinated as a young boy with the belief that non-Muslims were condemned. In primary school he carried pictures illustrating the blessings awaiting Muslims in the afterlife and the torment awaiting non-Muslims. This provoked him to physically assault Christian students, and he gladly endured the beatings in the school assembly that were his punishment. He now describes his commitment to Islam as “fanatical.”
S_____ persisted in his new Christian faith in spite of the obstacles. His father continued to affect his life behind the scenes, collaborating with a Muslim instructor to have him transferred to an Arabic college. S_____ explains, “Fortunately, I failed the interview.” His father refused to sponsor his education and continued making credible death threats. His mother took a more conciliatory tone, not advocating violence, but pleading with him to return to Islam.


S_____ fled to the home of a Christian relative living in a city in a predominantly Muslim region which nevertheless has several churches. He began immediately to connect with other youth, talking with young Muslims about Jesus and the Bible.
In 2013, S_____ attended a GC3 camp organized by youth who had attended the Master Trainers’ Seminar in Jos, Nigeria, on the campus of ER’s School of Evangelism. He was taught to look for those whom the Spirit had already prepared—for a “man of peace,” as Jesus instructed in Luke 10:5-6. He also learned how to use statements about Jesus in the Koran as a bridge to the hearts and minds of Muslims. This approach would be less confrontational and safer for everyone, and would also result in increased fruitfulness.
S_____ returned to his home city with a new methodology and a new resolve. The region is still mostly Muslim— every effort is made by local officials to frustrate and openly persecute all Christians, but especially MBBs. Energized and inspired by the GC3 seminar, S_____ began quietly to organize a camp for local youth. Last month (April of 2014), S______ conducted a GC3 camp at a secondary school with 43 youth in attendance, many of them MBBs.
S_____ says, “I am grateful to God for showing me the light and revealing to me His grace. I thought I was on the right path until He showed me the way.”
In Jos, ER's President remembers a Muslim-background believer (MBB) standing to his feet after the lesson about persecution. “When we wake in the morning, we never know whether we will be alive at the end of the day.” This is no exaggeration, and in the silence following his statement, St___ turned to D___ P___ and asked him to pray. P___, from India, is no stranger to persecution.
He had been marked for death and tied to a tree by Hindus intent on killing him. Only his mother’s prayers and the providential arrival of the police prevented his death at that moment. As the group surrounded P___ and the MBB, earnest prayers for protection, courage, and perseverance ascended to the Throne of Grace. Will you add your “Amen” to those prayers?And will you commit to pray, as God leads you, for persecuted Christians around the world?  We must be faithful—lives are in the balance!
Posted by ERAdmin at 10:58 AM No comments:

Among the Cloud of Witnesses


“Years have passed since Clara Stromberg laid down her life for a tribe’s salvation, but there are tribes who wait still today. They are hopelessly lost, fearful each day, knowing no hope for life. Day after day we receive word of our brothers who are giving their lives for the salvation of those tribes, and they are enduring persecution. But they are working for the salvation of lost tribes, and God is wonderfully blessing their efforts. Better yet, they are serving the Lord who laid down His life, and we know that He will pour out His rewards when we meet Him around the Throne.”
Thelma Braun’s distinctive voice flowed forth from my computer speakers, and it was as if God had rolled back time a few years. I was working earlier today on a new project: posting treasured recordings online so they may be heard by anyone with access to the internet. Before I could post them, I needed to listen to a few. Reminded again of her passion for missions and her love for Jesus, I couldn’t help but wonder what she would have to say about all ER has done since she went to heaven in 2009. I know she would be pleased that S___ R___, supported by the home office staff and ER’s precious partners, has launched a mighty movement to mobilize Asia’s women for discipleship—the Women’s Impact Network. We are following in Thelma’s pioneering footsteps as she initiated the movement, launching Women’s Work Conferences in 2005. She discipled both S___ and me in a very meaningful way, calling forth our gifts for ministry and encouraging us to work hard for the Lord’s Kingdom. There is no doubt she would have great joy as she saw the women assembled for training and making their commitments to begin discipleship groups.

The concept of winning Unreached People Groups (UPGs) to the Lord would seem “old hat” for Thelma. She and Willys left America in 1945 for Belgian Congo for just that purpose. Her radio message, “Why India?” lays out clearly the rationale for opening new ministries in that vast nation—that’s where the majority of unreached people live and work.  In the radio message quoted above, Thelma called them “lost tribes.” No matter the terminology, the concept is the same: the message of salvation in Jesus Christ needs telling. 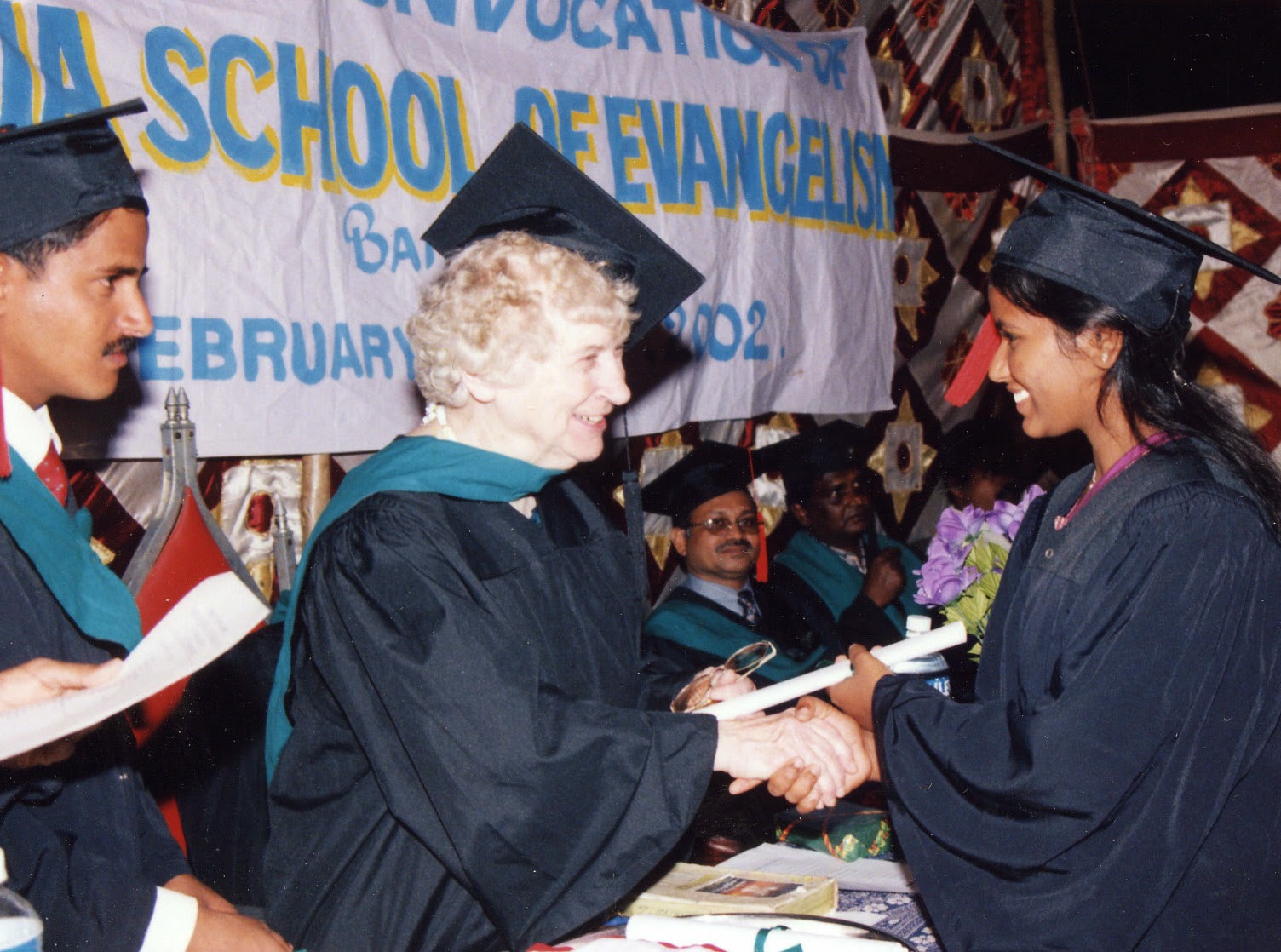 Great Commission Challenge Camps (GC3s) were the first brand-new initiative for ER after Thelma went to be with the Lord. She loved young people and many who attended those early GC3 camps count it a blessing to have met her and heard her messages.  Thousands of youth have been trained, and as the movement has now spread to Thelma’s beloved Africa, it’s clear that GC3 has staying power. Spin-off camps, most of them funded by indigenous ministries (without any ER support), continue to train young tentmakers who will be equipped by GC3 to share their testimonies, win people to Christ, and disciple the new converts to win others.


ER’s digital presence has increased dramatically since 2009. A revamped website came first, and then we have added a Facebook page, blog, and now an internet radio station. We receive donations online, and have added a weekly Friday Foto e-mail in addition to the Prayer Hotline which Thelma enjoyed writing.
Hebrews 12:1 reads, “Therefore, since we are surrounded by such a great cloud of witnesses, let us throw off everything that hinders and the sin that so easily entangles. And let us run with perseverance the race marked out for us…”  Thelma’s familiar voice speaks now only from recordings—she has now joined the “cloud of witnesses” referenced in Hebrews. The Scripture then urges those of us who yet live to


If you would like to hear Thelma’s challenge again, visit ER’s new
internet radio station by following this link:

To receive the weekly e-mailed Prayer Hotline and Friday Foto, go to ER’s web page by clicking on the link below. Then click on the icon that says, “Sign up for e-mail.”

One UPG Reaching Another!

In the remote village of H____, in the Indian State of Jharkhand, M___ M___ was in trouble. His beloved wife suffered from epilepsy and he was desperate for her to be healed. M___ is Santal, from an Unreached People Group of 8.3 million that has been greatly impacted by ER’s Jharkhand School of Evangelism (SOE) and its graduates who have been working among them for several years.
M___ had already left his Animist religion and converted to Hinduism, but that change merely added to his sorrows. His worship of the many gods and goddesses was only empty ritual. Eventually, M___ met a Christian pastor sponsored by ER’s partner ministry in Jharkhand and a graduate of the Jharkhand SOE, who prayed over his wife, and she was instantly healed! They accepted Jesus right away, and M___ M___ dedicated his life to serving Christ.
M___ was trained in the Jharkhand School of Evangelism, and felt called to the mission field in Eastern Jharkhand state. This is a vastly unreached region with over 120 villages where the gospel has never been preached! Nearly 100,000 people live in the region. 60% are Hindu, 20% are animist, and 20% are Muslim. Alcoholism and illiteracy are among the many scourges of the people that make evangelism difficult and discouraging.
M___ is engaging these unreached people. At least six tribes designated “Least Reached” by the Joshua Project are among them, including the Nai.  Read more about the Nai UPG on the Joshua Project website at: http://joshuaproject.net/people_groups/17745/IN.
This is M___’s strategy for ministry which he learned in SOE training: first he chooses a receptive village, surveys it, develops bridges of friendship with the people, and preaches the gospel in evening meetings. With those who show interest and willingness, he starts a discipleship series called New Life. Then, with those who have come to Christ, he plants a church in an unreached region. Presently M___ has surveyed 15 villages. His plan is to baptize 15 families in the next year, and within five years about 100 families.
M___’s testimony contains a riveting detail. ER's strategy of reaching M____’s people (the Santal) has resulted in sending a converted Santal as a missionary to the Nai. One member of a UPG is now reaching out to another! Evangelism Resources, through its project to engage Unreached People Groups through Schools of Evangelism, has the potential to repeat M___’s story hundreds of times.
ER is asking for prayer for M____ M____. Please pray with them in these requests:

on our website at: our School of Evangelism page.

Posted by ERAdmin at 8:20 AM No comments: