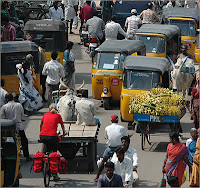 India’s roads are unbelievably crowded. Along with trucks and buses, taxis, motorcycles and motorized rickshaws, a few intrepid souls venture forth on bicycles. They literally take their lives into their own hands.

A newspaper columnist captured the dilemma perfectly, writing, “’India lives in its villages,’ Gandhi said. But increasingly, the people of India are dying on its roads… Poor road planning, inadequate law enforcement, a surge in trucks and cars, and a flood of untrained drivers have made India the world’s death capital.” Bicycle fatalities jumped 40% in only five years to more than 118,000 in 2008, and that statistic has continued to climb. 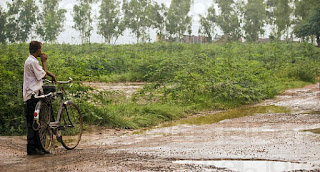 Into the tide of vehicles ride committed men and women on a mission.  Many of ER’s School of Evangelism graduates minister in rural villages, and bicycle travel is the most economical mode of transportation.  Challenges include roads that are poorly maintained; some are nearly impassable during the rainy season. When one considers the added danger of being struck by another vehicle, the risks are formidable, indeed. 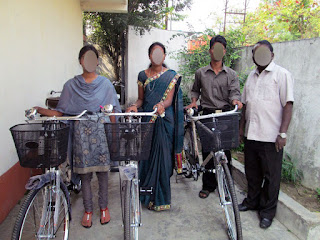 The SOE Director in Maharashtra state recently sent photos of some of his graduates with their new bicycles. Their pictures are included here, but their faces have been blurred to protect their identities from those who might seek to persecute them. They are willing to face hardship and dangers for a higher purpose–that of seeking the lost to introduce them to the Savior.

India travel is no less dangerous for those in cars, or even pedestrians. ER AIDA Director S_____ R_____ was seriously injured in a car accident; God graciously helped him to recover and return to work. ER partner, beloved Dr. T.S. David from Rajasthan, died a few years ago from injuries sustained in a car accident. In November, a precious SOE graduate was killed while standing beside a road in northeast India, struck by a truck. He left behind a grieving widow and children.

Will you pray Psalm 91 for these intrepid souls? “There shall no evil befall thee, neither shall any plague come nigh thy dwelling. For he shall give his angels charge over thee, to keep thee in all thy ways. They shall bear thee up in their hands, lest thou dash thy foot against a stone.” (v. 10-12). And then will you pray that God will give them fruit for their labors, precious people who will receive the truth of the gospel and put their faith in Jesus Christ?

You may learn more about School of Evangelism training on Evangelism Resources’ website at: http://www.erinfo.org/viewNavMenu.do?menuID=116