Hate Is Strong and Mocks the Song


Then in despair I bowed my head, “There is no peace on earth,” I said, for hate is strong and mocks the song of “Peace on earth, goodwill to men.”  This verse of a familiar Christmas carol rings so true. Hatred is a strong force in the earth, but it is being bravely met by those who desire to demonstrate God’s love as shown so magnificently in Bethlehem and at Calvary.
Today, December 14, Pastor B____ and two of his fellow students will begin a perilous journey. A student at the School of Evangelism in Jos, Nigeria, B____’ commitment to training has been seriously tested.

Two months ago he learned of bomb blasts carried out by Boko Haram, a militant Muslim terrorist group in northeastern Nigeria. The bombs had struck in Maiduguri, B____’ home town, the city where his wife and children still live. Frantic phone calls were unsuccessful because the blasts had so damaged the infrastructure. He lived with uncertainty regarding his family’s safety for days, until at last he was able to connect with them.
A short visit home came a few weeks later, and B____ seriously considered staying with his family. Ironically, it was they who insisted that he return, deeming his training in evangelism too important to abandon. Tearfully, they parted again, trusting God for safety and protection. 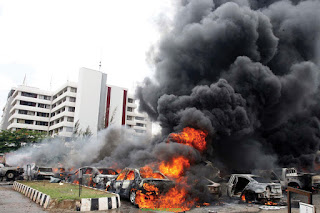 In early December, B_____’ great concern was renewed. He received a report that on December 3rd, terrorists had attacked his neighbors, dragging them into the streets and killing six of them.  B_____’ family huddled inside their home, uncertain of what would happen next. The danger of death is real for Christians in northeast Nigeria–Boko Haram has warned Christians to leave the region or face execution.
As you read this blog, Pastor B____ may still be traveling. Terrorism has made the journey not only dangerous, but arduous. A trip that normally would take 9-10 hours now is expected to take at least 24 hours. Checkpoints have been established by government forces in an attempt to keep order, but at times violence has broken out between the soldiers and the terrorists.
Traveling nevertheless into the fray, B____ and his classmates carry within them the light of Christ–the only hope for bringing true peace, and yet the very characteristic the terrorists are seeking to eradicate. This is true warfare–the Kingdom of Light versus the Kingdom of Darkness.
Please pray for these dear brothers in the Lord! They are determined not only to return home to celebrate Christmas with their families, but to complete their training and return to ministry in that very region.  This is true courage.
This Christmas, celebrate the birth of Christ rejoicing in the blessing you have of living in a peaceful land. If you are reading this blog from a region where there is no political or religious peace, remember that peace can reign in your heart even when war rages in this world.  May God’s peace be ours this Christmas season.
Posted by ERAdmin at 1:08 PM