The jungle road they had been traveling seemed to be turning into a path more suitable for walking. Driving slowly, S___ and S_____ R_____ began to wonder what adventure awaited them. Nothing but dense vegetation or fields could be seen in any direction–there was no sign of human dwellings. Silently, each began to pray for protection.
Gujarat State is in western India, with a population of more than 60 million people. It has tremendous geographical diversity, including jungles and more than 1,600 kilometers of coastline on the Arabian Sea. But it also is diverse in religions–90% are Hindus, with ancient roots, and 9% are Muslims. Other minority religions include Sikhs, Buddists, Jainists, and Zoroastrians. Christians number only one-half of one percent; there is only one Christian among 200 Gujarati people.
Although India’s constitution allows religious freedom, Gujarat State enacted anti-conversion laws in 2003, following riots between Hindus and Muslims which resulted in more than 1,000 deaths. Christians are often targeted under these laws, accused of “enticement” based on ministries which provide material assistance, especially to those of low caste who live in poverty. In spite of the danger of legal problems, Christians like the R_____s fearlessly, though cautiously, train others in methods of sharing the gospel. It was this mission that placed S_____ and S_____ on that desolate jungle road in November of 2012. 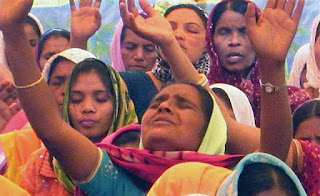 Finally the village appeared, as if out of nowhere. Unexpectedly, the couple found themselves in front of a large church building. In July of 2012, a lone woman had traveled from the village to a women’s conference sponsored by ER/AIDA. Greatly stirred by the message, she approached S_____ and asked her to come to her village to teach them methods of sharing the gospel, such as Five-Finger Evangelism, the Roman Road, and the Wordless Book.
When the R_____s arrived, they heard sounds of the youth choir practicing for the praise and worship service planned for the next day. Their hostess greeted them along with the youth president. To their surprise, they were told that almost the whole village is Christian, with just a few Hindu families. The people were on fire for God, eager to learn from the Word.
Eleven youth had attended the Gujarati Great Commission Challenge Camp (GC3) held July 5-7, 2012. Simple young men (among them was a bullock cart puller, an electrician, and a mechanic), they had already taken ER’s Tentmaker’s Manual and gone to nearby village churches to instruct other youth how to take Christ’s good news to their friends and neighbors.
S_____ and S_____ had been called to teach “Discipleship” and “Mission” for a one-day youth conference the group had planned and funded on their own. Over 100 young people gathered, some traveling more than two hours to attend.
A women’s meeting had also been organized, and more than 150 women were taught in the same manner as the woman who had attended the July meeting. Their commitments to fulfill the Great Commission are sure to bear good fruit in months and years to come.
On the evening of November 5th, an open-air meeting was held. This is a rarity in India, particularly in a state with anti-conversion laws. More than 300 people gathered to hear the R_____s’ messages on the topic “The Cross of Christ.” Hungrily, the people took in every word, marveling on the expanded teaching and indicating tremendous desire to grow in their knowledge of the Word of God.
This true-life account of how God is moving among the Gujarati tribal people is evidence of something remarkable. ER sponsors GC3 camps and women’s conferences, but the effect is not confined only to those who attend the sponsored events. Spin-off ministries are burgeoning all across India, fed by the zeal and commitment of those equipped in the ER events. This report will certainly not be the last of its kind–ministries are ongoing, and more victories are being won every day.
Christians are familiar with the missions mandate in John 4:35, when Jesus said, “I tell you, open your eyes and look at the fields! They are ripe for harvest.” We know this is true today–we see it in so many ways.  But we are also seeing modern fulfillment of the ensuing verses: “Even now the one who reaps draws a wage and harvests a crop for eternal life, so that the sower and the reaper may be glad together. Thus the saying ‘One sows and another reaps’ is true. I sent you to reap what you have not worked for. Others have done the hard work, and you have reaped the benefits of their labor” (John 4:36-38).
Think of this: when you give to Evangelism Resources or pray for its ministries, God takes what you invest and multiplies the impact. We are accustomed to the idea of a “matching grant,” like the one currently in operation–a foundation matches our gifts for GC3 Africa with an equal donation, doubling the monetary amount. But God is offering a “multiplication grant,” increasing exponentially and infinitely our humble investment, supernaturally bringing fruit we did not expect and could not imagine.
“Now to Him who is able to do exceedingly abundantly above all that we ask or think, according to the power that works in us, to Him be glory in the Church by Christ Jesus to all generations, forever and ever. Amen.” (Ephesians 3:20).
To learn more about the ministry of Evangelism Resources, visit our website at: www.erinfo.org.